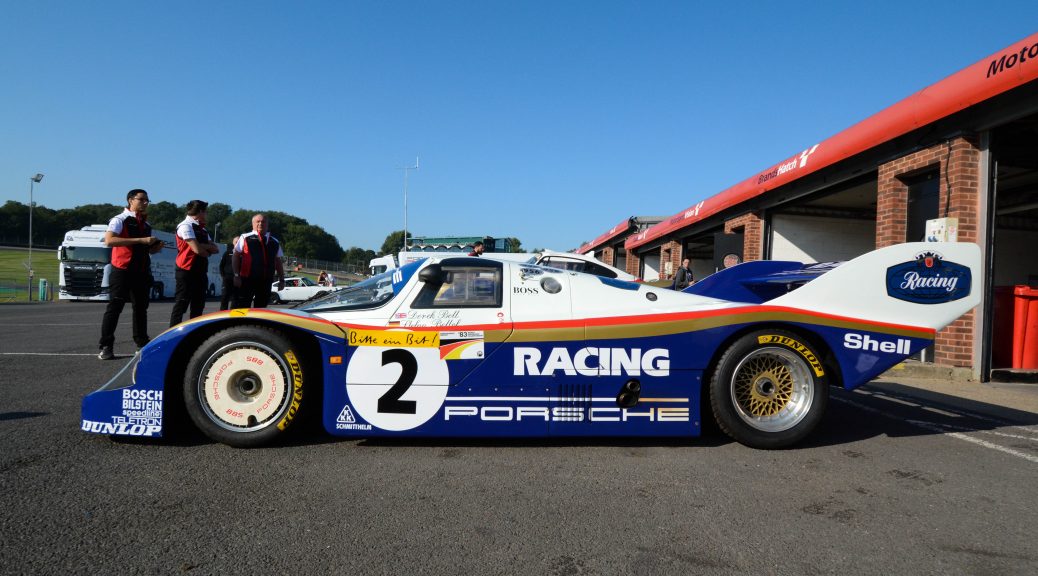 The 70th Anniversary of the first Porsche production car had the highly beneficial side-effect of reviving the Brands Hatch Festival of Porsche.

Brands is a lovely compact circuit that’s easily and quickly accessible from London and unlike some of the airfield based circuits (e.g. Silverstone and Goodwood) it offers excellent viewing opportunities over large parts of the circuit without having to walk too far.

Porsche club tickets including dedicated parking inside the circuit but it necessitated an early start to be in-situ between 07:30 and 09:00 after which the general public were allowed in. Risking the wrath of the Mrs with the early start – I was relieved that the Yellow Peril conveyed us to Brands for around 07:35 without incident.

After a welcoming and much needed fresh coffee at the enormous PCGB tent we ventured into the Paddock where I fruitlessly endeavoured to justify the early start by pointing out the open and easy access to a range of wonderful cars before the rest of the paying public were allowed in!

Given that this year is the 70th anniversary of Porsche car production – I expected to see more early cars at the Porsche Festival but 356’s and early 911’s were relatively thin on the ground.

Simon Bowrey’s beautiful silver Pre-A 356 (433UYN) was probably the earliest Porsche at the event. Dating from 1953 – it’s bent screen and early bodywork shape and features are subtly different from later cars and the whole package is sublime.

The more I look closely at examples of the Porsche 904 – the more I like them. The simple elegant lines of this rather unique (by Porsche standards) sports car smack of expert design. Alexander (Butzi) Porsche takes credit for the design, completed around the same time that he penned the classic and incredibly long lived lines of the 911.

Like the early 911’s – the 904 looks just right from any angle and it is a tragedy in some ways that its creation coincided with the transition from 356 to 911 models.  Although the 904 was always intended to receive the new 2.0L 6-cylinder engine designed for the new 911 – it had to use the 4-cam, 4-cylinder 356 Carrera engine until development work was completed on the new 6-cylinder engine.

Once Porsche finally managed to fit the new flat-6 911 engine into the 904 – the factory went one step further and fitted their 1962 804 F1 car derived Flat-8 engine into a handful of cars. Whilst this must have been a phenomenal car to drive – it was rumoured to occasionally suffer from “exploding flywheel syndrome”!

A one-off hard-top, Flat-8 engined 904 was built for the personal use of Ferry Porsche.

I believe this particular car is the former Ben Pon Racing Team Holland 904 GTS dating from 1964. The orange colour scheme is a bit of a give-away!

A fantastic range of 911’s turned up for the Porsche Festival and it was great to see some very special cars in the paddock and around the spectator car parks.

SWB cars have become extremely popular in recent years and it is no longer rare to see large grids populated exclusively by SWB cars.

Steve Winter’s Jaz Porsche prepared red ’65 SWB car has been performing really well in the Equipe race series and looked very happy out on track at Brands with much bigger and more powerful brethren.

As far as racing Porsche’s go – the 917 is my favourite. It was designed and developed within an incredibly short time frame by a group of extremely talented engineers to exploit a change in endurance racing rule book.

The bodywork in Lang-heck (long tail) and Kurz-heck (short tail) form is beautiful and brutal at the same time but the fabulous flat-12 engine behind the cockpit is what really defined the car.

Having built the prerequisite number of cars for homologation – Porsche quickly corrected the deficiencies and foibles of the car that manifested themselves during early races to produce the barn-storming red and white Number 23 Salzburg Racing Kurz-heck version that achieved Porsche’s first outright win at Le Mans in 1970 in the capable hands of drivers Richard Attwood and Hans Hermann.

Porsche 935’s are great fire breathing monsters. They are best viewed at around dusk or during full darkness when they reach the end of a long straight when they belch out flames resulting form unburnt fuel hitting the hot exhausts on overrun.

The green car was the ’81 DSD owned 935 K3 and the white car (another K3) formerly belonged to Steve O’Rourke who was the manager of Pink Floyd. The K in K3 signified these cars were built by the infamously successful Kremer brothers.

This 959 Porsche Rallye car took second place in the gruelling Pari`dakar Rally in 1986 driven by Jacky Ickx and Claude Brasseur.

First place was taken by another 959 driven by Rene Metge and Dominique Lemone.

The 959 was a ground breaking car conceived by Helmuth Bott under the Peter Schutz management regime essentially to compete as a Group B rally car. Both was however conscious that development of new race cars had spin-off benefits for core road production models and that these were quickly established through the need to build sufficient numbers of cars to achieve homologation for particular racing formulas.

The 959 firmly established the use of the PSK 4-wheel drive in sports cars and also pushed new boundaries in the use of Aramid (Kevlar)/ aluminium composites in its bodywork, water-cooled cylinder heads and twin sequential turbochargers on the engine, improved aerodynamics and automatic height adjustment (on road cars).

Interestingly the 959 road car was initially not street legal in the USA as Porsche refused to supply four cars from a total production run of just 337 cars (an additional 8 were built up from spares later) required for crash testing in the USA.

In Europe the 959 was welcomed with open arms by Porsche cognoscenti including the conductor and Porschephile Herbert von Karajan.

The Porsche 956 kicked off a long period of endurance racing domination for Porsche in the ’80’s which continued with the onward evolution to the 962 (essentially a longer wheel base 956 which moved the driver’s legs behind the front axle for obvious safety reason).

The driver’s names on the side of this Rothmans liveried car (Derek Bell and Stefan Bellof) marked it as being very special. I actually saw this driver pairing at Silverstone in the ’80’s racing what was probably this car!

Bell was the mature, level-headed and highly experienced half of this driving partnership but Bellof was a wonderfully exuberant and incredibly fast apprentice who was sadly killed in a crash at Spa before his full potential could be realised.

As this car was rolled out of its pit garage – it was fascinating to see a bunch of Porsche Factory engineers (young and old) mill around it examining every detail. It showed that these race-hardened expert mechanics were also enthusiasts at heart.

A conversation kicked off between one of the more mature Porsche engineers and the owner of the 956 on the topic of wheels and tyres exploring the relative merits of Speedline over Denloc wheels in combination with wet and slick tyres. We left them to-it with the Porsche man passing-on contact details of a company that could provide the full spec for re-manufacturing Speedline wheels with the correct offsets etc. etc.

The Porsche 962 built upon the already fantastic reputation for speed and reliability established by the 956 but its lengthened wheel base allowed the position of the driver’s feet to be moved behind the line of the front axle. This was a prerequisite for the car to compete under IMSA rules.

Porsche very effectively turned the GT1 category rule book on its head by developing a purpose built prototype which just happened to have a road going variant. This was a diametrically opposite approach to that taken by the likes of McLaren(with the F1) and Ferrari (with the F40) – both whom started with road cars which were modified for racing.

The GT1 borrowed chassis elements from the 993 and angle from the 962 to create an out-of-the-box class winner at Le Mans on its debut outing in 1996.

An overall win at Le Mans against more powerful and faster competition came for the GT1 in 1998 as other cars could not match Porsche’s legendary reliability.

The GT1 remains a handsome car and it would be rather nice to sample a road going version but I don’t think it would cope with Islington’s mountainous speed bumps!

Seeing the 919 Evo in action was a real privilege but it seemed to require some pretty intensive preparation by the Porsche Factory mechanic team to prepare it for its demo runs around the tight Donington circuit.

On its first run – it got off to a slow (by 919 Evo standards) start but then got faster and faster until it lost hybrid power.

On its second run – it seemed to get off to a much better start as it lapped the circuit with a modern 911 GT car but then seemed to loose all power as it rounded Druids Corner. Unfortunately I didn’t get to see if it managed a third outing.

This 1,200bhp monster shaved almost 5 minutes off the Nurburgring lap record set so many years ago by Stefan Bellof in a Porsche 956 during qualification for an endurance race.

Given that Bellof achieved this record under race (race qualification) conditions in a car that was fully compliant to the rules and restrictions of the time – there is a high degree if debate about the legitimacy of the record set by a completely unrestricted and highly modified 919.

From my perspective – Bellof’s record still stands as a lasting monument to his driving skills in the 956 as it was set according to standard circuit lap record conditions in a car that was fully conferment to Group-C rules and regs of the day during a competition weekend.

The record set by the 919 is completely different as it was set under no-holds-barred principles to show from a technical perspective what can be achieved by this type of hybrid vehicle when the rule book is thrown away.

The debate will rumble-on but I suspect that had he still been with us – Bellof would have absolutely relished the opportunity to drive a completely unrestricted modern race car to it’s full potential!

The force of nature that is Magnus Walker was present in the PCGB tent to sign copies of his book (or books).

The long queue of people waiting for personally signed copies of his book confirmed that this LA based Urban Outlaw with Sheffield roots is still something of phenomenon amongst the Porsche community.