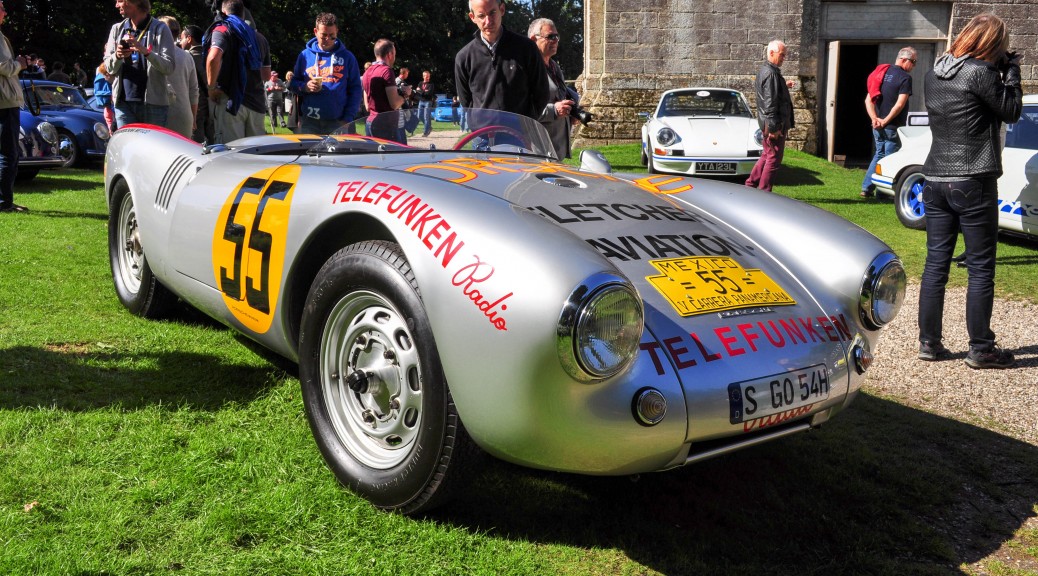 My trip to Hedingham 2015 started well as I drove passed Stansted Airport to find myself accidentally sandwiched between two 2.4 911s. We managed to pick up another 2.2E along the way to match mine and to bring our noisy convoy of early 911s up to 4, much to the delight (or possible consternation) of other road users!

This year’s Hedingham Porsche gathering  delivered an enormous and varied turn-out of classic Porsches which confirmed the burgeoning popularity of the event, further enhanced this year by the inclusion of a Classic Porsche Auction run by Coys of Kensington.

The Porsche Museum, Porsche Cars GB and some very trusting private owners enhanced the already great turn-out with some extra-special cars including beautiful and rare 356 Carreras, 550 Spyders, a 904 and an iconic Gulf liveried John Wyer 917 (as used by Steve McQueen in his film Le Mans).

One corner of the Hedingham classic Porsche parking area was exclusively reserved for the large contingent of Dutch 356’s driven across by their proud owners.

The Dutch drivers and passengers of these cars were deservedly rewarded for their efforts in turning up by their very own cavalcade up and down the driveway to the castle keep. It’s great to see such precious cars being enthusiastically driven long distance and across international borders to events like Hedingham rather living pampered lives cocooned in hermitically sealed garages or arriving on the back of trailers.

One of the most striking cars on show was a very early Porsche 550 Spyder on loan from the Porsche Museum in Stuttgart. This proved to be an important car for a number of reasons.

First and foremost:- it won its class and came 3rd overall in the gruelling 1954 Carrera Panamericana race in Mexico. This win against much bigger, more powerful and arguably more robust machinery on the decidedly rough Mexican roads earned Porsche the right to use “Carrera” as a performance defining model name.

The second  reason:- unlike the opposition who utilised 2 drivers, this car was driven for over 19 and a half hours by just one driver (Hans Herrmann) leaving the other allocated driver to focus exclusively on preparing and repairing this delicate car prior to the race and between stages. Herrmann later went on to co-drive a Porsche 917K to secure Porsche’s 1st outright victory at Le Mans in 1970 with Dickie Attwood.

The third reason:- Porsche and Fletcher Aviation pioneered the use of aerial support during the race through the use of a single seater 190 mph Navion aircraft from which Porsche’s racing director Huschke von Hanstein could observer the race and then advise the ground team on strategy.

The fourth reason:- Porsche’s technical link-up with Fletcher Aviation which included licensing Fletcher to build industrial Porsche engines  and joint development of an innovative jet cooling system to replace power-sapping fan-cooling for 356 and 550 engines resulted in the first example of company sponsorship. The bold Fletcher Aviation logo emblazoned across the bonnet of the 550 Spyder was later joined by other sponsor logos in the form of Telefunken and Castrol. This paved the way for the logo-splattered race cars we see today on which every square millimetre of bodywork is used to advertise sponsors big and small…..for a price of course!

This lovely old 356 Super raced in the 4th running of the Carrera Panamericana in 1953 driven by Manfredo Lippmann. Sadly it retired due to mechanical problems but it was great to see it in all it’s glory parked up near the castle keep.

Lippmann who died in Jan 2015 was a highly successful coffee grower in Guatemala who indulged his interest in cars by participating in a number of road races across Mexico and Central America.  He founded the Asociacion Guatemala de Caminos which went on to buy no less than three 356s and two 550 Spyders to campaign on the rough roads of the region.

His successful exploits racing other cars led him to securing the Mercedes Benz franchise for Guatemala which he later sold to re-focus his attentions on his coffee business and his vintage car collection.

This pretty little 904 was parked near the castle keep along with a number of other precious Porsches. It’s vivid orange colour scheme marks it out as the Racing Team Holland entry in the 1964 running of the 24 Hours of Le Mans where its drivers Ben Pon and Henk van Zalinge finished 2nd in class and 8th overall behind much bigger engined and more powerful Ferraris and an AC Cobra.

This particular car utilised a 2.0L Fuhrmann 4-cam flat-4 engine as used in the 356 Carreras and 550 Spyder although other 904 variants used flat-6 and even flat-8 units.

Hedingham became centre of the Carrera world for a day thanks to the wide range of Carrera models on show.  It was nice that the there were also examples of the 356 and 550 Spyder which actually raced in in the Carrera Panamericana Show thereby earning Porsche the right to use the name “Carrera”.

Although the use of Carrera in model names was meant to be synonymous with higher performance specifications – the significance became somewhat diluted over time through over-use on more mundane models.

Porsches actually started competing in the Carrera Panamericana in 1952 through the efforts of Graf von Bercheim and Paul Alfons Metternich. The 356 Super of von Bercheim failed to finish but Metternich achieved a creditable 25th place overall in his 356 Cabriolet Super.

The 1953 running of the race saw an increase in the number of Porsche entries consisting of:-

In 1954 Porsches again turned up in force with:-

This wonderful 917K in Gulf livery was used in the filming of Steve McQueen’s classic film “Le Mans” and joy of joys – it wasn’t just a static display. To everyone’s delight – it was actually driven up and down the drive .

This really is one of the most beautiful and potent cars ever made.

“I’ll take that one! Don’t bother wrapping it up”

The Classic Porsche Auction organised by Coys was a first for Hedingham and judging by the people buying programmes and sitting through the auction it was eagerly anticipated.

Chatting to Guy Newton of Coys ahead of the auction – he admitted to an understandable degree of nervousness about this 1st running of an auction as part of the event but the glorious weather and increasingly strong interest in Hedingham in particular and in Classic Porsches in general ensured some lively bidding.

Not all cars reached their reserves but this was perhaps more down to it being a relatively new event in the auction calendar rather than any indication of declining Classic Porsche values. I fully expect there to be a follow-on auction next year.

Here are some of the auction cars which caught my eye:-

I personally think that there is more than enough interest and enthusiasm from the UK and abroad for Hedingham to spread over an entire weekend instead of just one Sunday preceded by a Saturday evening talk + dinner. It could become the North Essex answer to Pebble Beach or Monterey!!!

Let’s face it – there was enough interest to entice what must have been a significant part of the Dutch 356 owning community to this years 1 day event. Bless them!

Major recognition has to go to Fred Hampton and a dedicated supporting cast of enthusiasts, specialists and owners who got this fabulous event off the ground in the 1st place and who have grown it into a world class not-to-be missed experience.