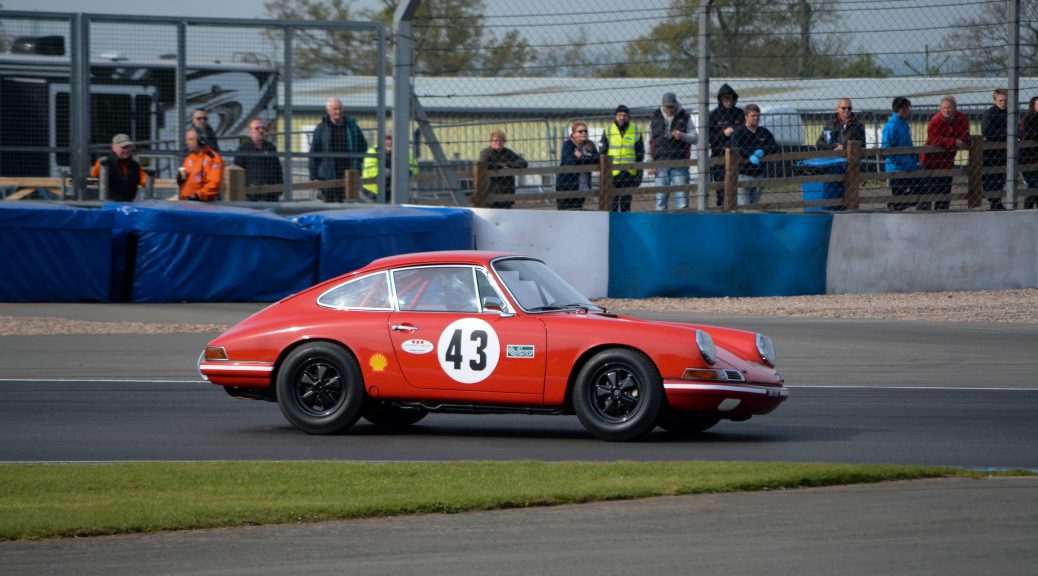 The offer of spare tickets from Steve Winter at Jaz Porsche overcame any remaining indecision over whether to get up to Donington this year.

Opting to go on Sunday meant I could watch Steve and his co-driver Rob Williams compete in the GT & Sports Car Cup for Pre-’66 GT & Pre-’63 Sportscars.

It was also a good opportunity to meet up with old friends Ken, James & Kirk.

I’ve been to the Donington Historic Festival a few times and it’s always been good. My only disappointment this year was what looked to me like quite large downturn in the number of attendees.

In previous years the infield has almost been bursting at the seams with car club members gathered in their designated areas around this picturesque circuit.

Not so this year which is sad. I can only put it down to the economic and political uncertainties of Brexit and the General Election. Woe is me! It certainly wasn’t down to the quality of cars on the varied grid.

First-up on Sunday was this 2 hour race for Pre-’66 GTs and Pre-’63 Sportscars. I love this category of racing as it features some of my favourite cars including Big Healey’s, TVR Grantura’s, E-type Jags of various shapes and sizes, XK Jags, thunderous Cobra’s, Sunbeam Tigers, delicate but nimble Lotus models, an unusual Morgan Plus 4 SLR, the beautiful Aston Martin DP214, Shelby Mustang GT 350 and a rare Lister Jaguar Coupe.

The marque I was particularly keen to see however was Porsche and no less than 5 ’65 SWB cars were on track to scrap things out. There were 7 classes of cars in this event plus specific makes and models within these classes so the spectators could choose from any number of smaller races to support within the race.

The Porsche battle was particularly well fought with the little SWB 911s spearing past much bigger opposition in the tight and twisty bits despite some of the bigger cars being overtaken (e.g. E-Types)  having around 100bhp more to play with than the race tuned 200bhp 911s.

The Cobras made a wonderful noise with their thumping great V8 engines  as did the Sunbeam Tiger Le Mans but the jags also had a high degree of aural grunt.

Another great race featuring some lovely old sports cars. The Richter Scale registering Allard J2 was my favourite especially as it seemed to be spinning its rear wheel its driver gave it the beans as he entered the start finishing straight.

The Cooper Bristol was also pretty nippy given it’s use 2L straight six Bristol engine derived from the pre-WWII BMW 328.

Big Healey’s in four and six cylinder form are always nice to see as are the beefy C and D-Type Jags and DB3 and DB4 Astons.

The Talbot Lago and Lister Bristol Flat Iron also looked and sounded great out on track.

This eye-catching Bristol 406 Zagato was parked-up in the paddock. the trademark Zagato double bubble roof was particularly pronounced on this car as was the rather unusual long perspex bonnet air scoop.

A handsome car all the same from the best era of Zagato design.

Whilst you can usually count on a decent turn-out of Marcos cars at such club oriented events – you rarely get to see a Marcos Mantis. Two turned up at Donington this year.

The weird swooping curves of the bodywork are far from being a styling triumph but the concept of a 4 seater Marcos was interesting when contrasted with their strict 2-seater sports cars of the period.

The Mini Marcos was also something of an ugly duckling but the one that turned up at Donington was unbelievably well restored. Way beyond the condition it would have come out of the Marcos factory.

The late generation GT2 looks like an amalgam of Marcos and TVR which is hardly surprising as it dates from a period when many former TVR personnel joined Marcos before the Marcos followed TVR into liquidation (again).

Here are some more cars or bits of cars that caught my eye:-