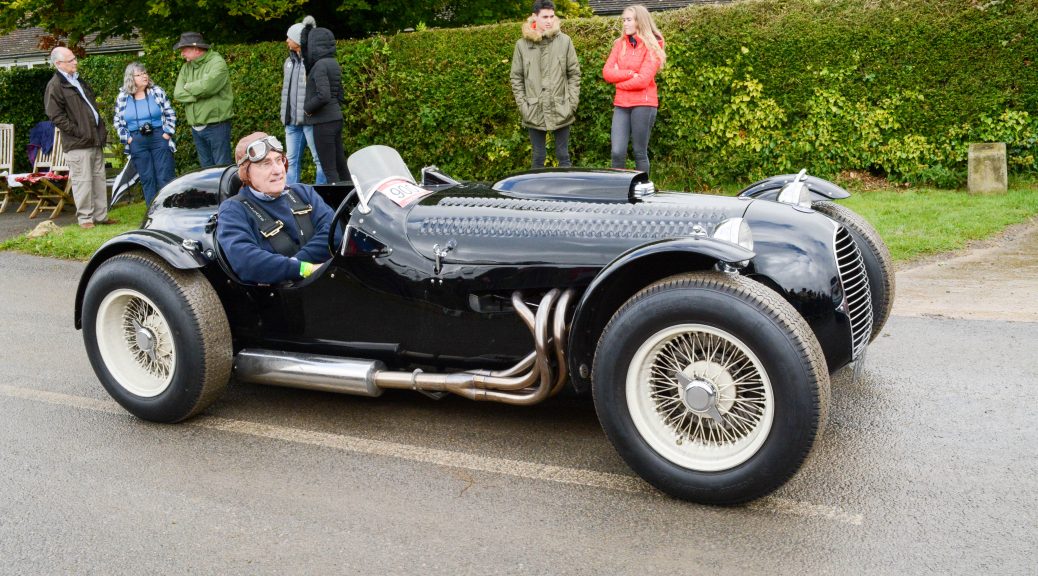 I last attended Kop in 2015 and I decided it was high-time for a return visit.

My drive out to Princes Risborough in the old 911 was uneventful but upon arrival misty and damp conditions meant parking in the field adjacent to the hill was bit like competing in a muddy rally stage. Walking from the car to the paddock entrance also made me realise that wellies might have been better footwear than trainers!

Rain, mud, mist and the occasional ray of sunshine made for varied light conditions and for somewhat restrained unofficial times for those competing on the hill.

When I say competing – this charity event is actually only allowed to use the Kop Hill public road for the annual two day hill climb event on the basis that it is un-timed and hence non-competitive.

The privilege of being able to drive up the hill and the benefit of all monies raised going to local charities brings classic vehicle owners and admirers out in droves. A great win:win scenario!

The AC Ace really is one of the prettiest sports cars ever made. Designed by John Tojeiro with strong design references from the Ferrari Barchetta – this was a proper gentleman’s transport between 1953 and 1963 after which the much more brutal steroid pumped V8-heart-transplanted Cobra took over.

This particular 1957 car had the desirable BMW 328 based Bristol 2.0 Litre straight-six engine which also powered Bristol cars of the period and quite a number of race cars.

Like all truly exceptional designs – the car is beautiful from any angle.

This particular car was one of just 25 converted to RHD by RuddSpeed. Why has this sort of elegance disappeared in modern car design?

I do like some of the older BMW models and love the cyclical twists of history which led the erstwhile aero-engine manufacturer first diversifying into into motorbike manufacturing and then into car manufacturing – the latter through building Austin Sevens under license (known as the Dixi in Germany). In a twist of fate BMW were forced to  “donate” their BMW 328 6-cylinder engine back to the UK (to Bristol Cars) as war reparations.

The old established car company Frazer Nash championed BMW’s cause in the UK by acting as their main agents before WWII as they did the same for Porsche after the war eventually morphing via Aldington Frazer Nash (AFN) into Porsche GB.

On another historic note – it is rumoured that the flowing lines of the Jaguar XK120 were heavily influenced by the bodywork of the Mille Miglia BMW 328. With now Mini being owned by BMW – the cyclical relationship between BMW and the UK continues.

I suppose it’s hardly any wonder as these cars are living, breathing  showcases of automotive ancient history and engineering ingenuity. The owners are simply temporary custodians tasked with preserving the vehicles for the next generation to appreciate.

Some astonish with their fabric or even wickerwork bodywork, rudimentary wooden spoked wheels and bone-shaking solid rubber tyres.

I was stopped in my tracks when I came across this diminutive and very rare Innocenti C.

This Ghia designed car used running gear from the Austin Healey Sprite including it’s 1098cc engine which made it very simple and relatively cheap to maintain once one had forked out the high purchase price for this hand built car.

An extremely pretty and elegant little car which looks a little like a shrunk-down Facellia.

Early Lotuses, Loti or whatever the collective name is – set Colin Chapman off on his route to F1 fame.

From producing one-off specials – he moved onto low production models such as the Lotus 6 and Lotus XI which could be driven enthusiastically on the road and on the track. These cars brought in the much needed cash to fund further race car development and properly launch Lotus as a brand.

Incidentally – the Lotus VI and Lotus XI were built at the first Lotus factory just up the road from me in Hornsey North London, tucked away behind the Railway Hotel on Tottenham Lane. In 1959 Lotus moved to a brand new purpose built factory in Cheshunt before eventually moving to their long term base in Hethel in Norfolk.

All Lotus cars stoically followed the Chapman ethos of “Simplify – then add lightness”!

Original three-wheeler Morgans just look great especially with a J.A.P. V-twin motorcycle engine up front. When my Tokyo born Mrs first encountered one of these at Brighton Speed Trials in the late ’80’s – she got all excited about the Japanese connection.

Bit of a let down when I explained that J. A. Prestwich – manufacturer of scientific instruments, early cinematography cameras and motorcycle engines was based in Tottenham! Sadly their old factory is now underneath the new Tottenham Football Stadium development.

Although I’d heard about Ed China’s Fast Furniture – I’d never seen any of it in the flesh/fabric so to speak but thankfully he was on-hand to provide a demo-run up the hill in his “Comfy Loafer” sofa.

It’s rather hard to believe but this speedy sofa has achieved 87 mph which is quite scary given it’s bluff aerodynamics and quaint controls – pizza pan steering wheel, beer can controlled brakes etc.

Mr China invited the BBC’s very own Mike Bushell on board for a mobile on-the-sofa interview.

Enthusiast and factory built specials – especially those from the 1920’s and ’30s range from re-bodied and tweaked Austin Seven’s through to aero engined behemoths with a massive disparity in power between the two extremes.

In order to race them sensibly on tracks such as Brooklands – cars were subjected to a handicap system in order to give smaller engined motors more of a fighting chance over their bigger bretheren.

I have great admiration for the brave drivers who tootled around the Brooklands banking in their dinky little Austin Sevens with 20 Litre fire breathing monsters whanging past either side of them. Very scary!

Later specials have followed the same principles of reducing weight and increasing power through tuning, supercharging, adding turbos  or through wholesale replacement of the power plant with larger capacity units.

Here are a selection the specials (ancient and more modern) in the paddock and on the hill:-

Always nice to see Porsche represented at such events and this time they were backed up by a Club gathering and a Porsche Dealership stand in the paddock.

The white SWB 911S was my favourite with the blue 356C a close second. The S must be a hoot to drive.

I just love the styling of old British and some foreign motorbikes. Rigid frames, sprung saddles and tank mounted hand gearshifts are probably not the most comfortable and secure features but they just look great.

The innovation on early machines is quite staggering and often pre-empted more widespread adoption by decades.

Also good to see many of the riders in period motorcycling togs!