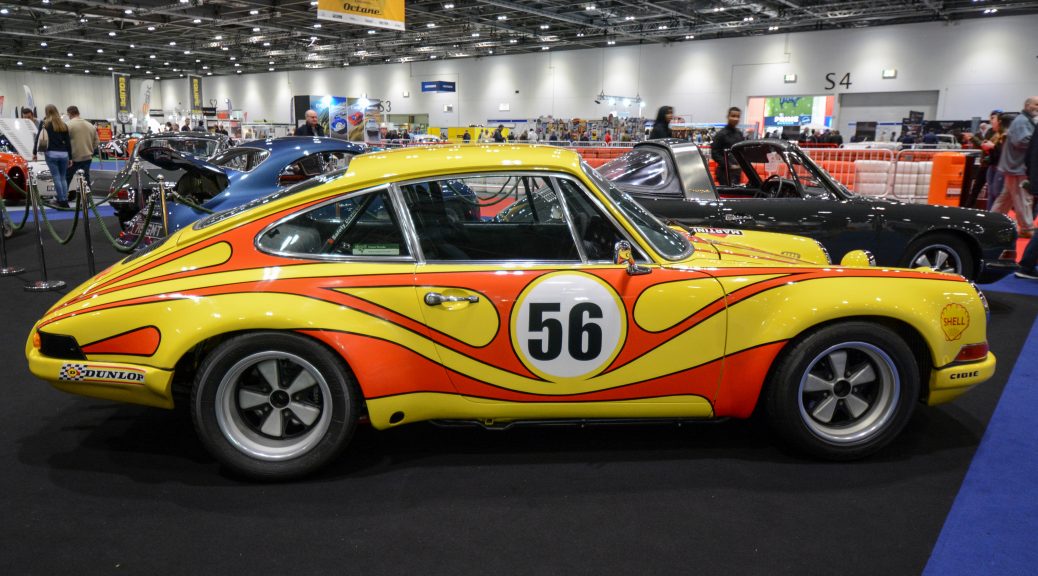 Having hummed and hawed about whether to go to this event or not I finally conceded the night before the last day and I’m glad I did.

I thankfully selected a less busy day and could circulate freely, snapping piccies of nice motors without having to electric-cattle-prod hordes of selfie-takers out of shot.

Erstwhile aero-engine manufacturer BMW have come a long way since their early days of automobile manufacture – during which they built badge engineered  Austin 7’s under the model name –  Dixi.

Along the way they have produced many great cars and two of my favourites  are the 328 and the 507.

This pre-war 328 is just sublime both in looks and drivability and it’s lovely six-cylinder engine was used to power a number of post-war British classics (AC Ace, various Bristol models and a smattering of race cars) in Bristol guise thanks to Germany’s war reparations with Britain.

My first recollection of seeing a 507 was in the 1971 film – The Last Run in which George C Scott ( playing the part of a retired getaway driver) is enticed out of retirement in Portugal to drive a gangster and his girlfriend to France.

As a classic Porsche owner – getting me to say something nice about Ferrari is a bit like asking an Arsenal fan to complement Tottenham on being above them in the Premier League.

I do however like certain classic Ferraris – especially the 250 GT SWB, early race cars and the rather sublime Berlinetta Boxer or BB512.  Its angular body styling should look dated now but unlike the contemporary 308  – it still looks jaw-droppingly beautiful.

The road hugging stance of the car is to my mind best accentuated by the red over black colour scheme with red colouring the upper part of the central tub, the forward hinged font section and the rear hinged rear section of the car.

In this respect it resembles a Lancia Stratos but with rear bodywork raised – it reveals 6 more cylinders than the Stratos V6 Dino engine and as intimated in the name of the car – the engine is a glorious flat-twelve boxer unit.

Here’s a sample of other Ferrari’s on-show. Any colour you like as long as it’s red!

Home grown British exotica from Jaguar is always nice to see in all of its forms but there was one William Lyons creation which pre-dated all of the Jaguar and even the preceding S.S. Cars on display.

On a stand in the corner of the exhibition was a Brough Superior motorcycle and sidecar combination. The Brough alone was enough to stop me in my tracks but  upon closer inspection – I saw that the sleek rocket shaped sidecar was non-other than a Swallow Sidecar.

William Lyons founded the Swallow Side car Company in 1922 in the seaside town of Blackpool. Ever the canny entrepreneur  – Lyons  later started to build car bodies and then entire cars powered by Standard engines under the revised company name S.S. Cars Ltd which changed its name again to Jaguar Cars in 1945.

The XK engine and the revolutionary XK120 sportscar were effectively conceived by Lyons and his brilliant engineering entourage as an aesthetic distraction from war-time manufacturing, and during lengthy overnight fire watching from their factory roof. Having their designs fully worked out during the war enabled Jaguar hit the ground running in the immediate post war years.

The powerful and stylish cars produced by Jaguar were an immediate hit in the lucrative American market as well as at home and they also made a real name for themselves in saloon and sportscar racing and rallying.

The general public’s abiding love of classics such as the C-Type, D-Type, XKSS and E-Type has spawned a number of replicas produced by companies who’s engineering skills enable them to restore original cars, make incredibly accurate replicas or create onward evolutions which combine period styling with modernised underpinnings to deliver contemporary supercar performance.

Eagle are one such company who can build a zero miles completely restored E-Type  as well their own interpretations of modern day E-Types in the form of their Speedster, Low-Drag GT and Spyder GT models.

Jaguar Classic are also now providing in-house restoration of  cars they originally created and are also producing short-run continuation series models of the D-Type and E-Type ands a range of heritage parts.

Sir William Lyons would be well and truly flattered by such a high degree of expert imitation and recreation of his design classics.

Lancia stopped selling their cars in the UK many years ago due to the strange chemical reaction between Lancia steel and British weather! Consequently – the marque has sadly dropped out of our collective consciousness.

Thankfully we are reminded of Lancia’s glorious past through historic gems at classic car events such as this.

This 1951 Pininfarina Cabriolet looked superb with it’s gleaming pristine bodywork and luxurious interior. Only to be expected of a former Pebble Beach prize winner one might say but superb cars still need to be maintained and improved!

What a wonderful car the Stratos is! Short, squat and extremely angular are not word’s that would normally be associated with automotive beauty but all apply to the Stratos and it is still a thing of beauty.

Lancia’s normal carrozerie of choice was Pininfarina so working with Bertone on this project was quite unusual. Success was however pretty well assured through the involvement of Marcello Gandini who had already designed the Miura and Contact for Lamborghini.

Having toyed with Lancia’s Fulvia and Beta engines during the development of the car – Lancia finally persuaded Enzo Ferrari to provide them with their 190bhp 2.4 Litre V6 Dino engine to power the car. Although this was the intended engine all along – Enzo would only agree to it after production of the Dino had ended.

This car was designed for rallying and it completed successfully during the ’70’s and ’80s – an incredibly long time for such a fast changing discipline.

It has that same wonderful feature as the Ferrari BB512 of forward hinged front section and rear hinged rear section providing free and open access to suspension, engine, electrics which was a godsend to rally mechanics.

To the “yoof” of today – the name Lamborghini conjures up images of exotic supercars such as the Huracan, Aventador, Centenario and Veneno.

Lamborghini’s roots however are quite firmly agricultural and there was a lovely reminder of the in the form of a wonderful Lamborghini tractor.

Lamborghini sports cars was borne from Ferruccio Lamborghini’s frustrated dissatisfaction over the poor build quality of a series of Ferrari’s he owned during the early ’60’s. In a reputedly fractious discussion with Enzo Ferrari, the latter reputedly told Ferruccio “if you are so unhappy with our sports cars – why don’t you build your own?”

That’s precisely what the Italian manufacturing magnate did and he gave the world such iconic and ground breaking cars as the Miura and the Countach thereby proving that frustration as well as necessity can be the mother of invention.

This revolutionary car was developed from a mechanical perspective by Lamborghini’s in-house engineers – Gian Paolo Dallara, Paolo Stanzani and Bob Wallace. Bodywork styling was put into the very capable hands of Marcello Gandini at Bertone.

Maserati built just sixteen examples of the Tipo 61 (or T61 for short) between 1959 and 1961 to compete in sportscar races at classic circuits such as Le Mans and Nurburgring. Its incredibly lightweight but rigid chassis, comprised of hundreds of small bore chromoly steel tubes intricately welded together gave rise to its nickname – the Maserati Birdcage.

This beautiful Giulio Alfieri designed car is a vision of bulges and curves wrapped around, but not completely concealing, its fantastic Superleggera chassis.

Mercedes-Benz have a wonderful history stretching back to the dawn of motor power vehicles. In racing terms they shared that wonderful golden or should I say Silver (Arrows) era just prior to WWII with Auto Union during which each manufacturer competed with each other to produce the most powerful cars driven by some of the most brave and skilful drivers.

In post-war times – the horrendous accident at Le Mans in 1955 brought an abrupt end to their racing ambitions only of them to return many years later.

The Mercedes-Benz 300SL Gullwing is arguably one of the most beautiful cars ever made.

There were original cars(e.g. a very original 2.7RS Lightweight), evocations (911 ST evocations) and replicas (a 356 Speedster replica). I think I also spotted a 356 Abarth!

According to the documentation displayed with this 956-103 – it is one of just 24 surviving 956 race cars, originally built for Preston Henn to compete in the FIA World Endurance and Japanese Sportscars Championships.

In it’s first race life it competed at Le Mans, Silverstone, Brands Hatch Fuji and Suzuka between 1983 and 1984 with its best result (2nd place) at Le Mans in 1983.

After major renovation – it started competing again in classic events from 2004.

Documentation on display with this car explained it is  962-C built in 1988 with chassis number 106B/2 for the Nisseki Trust Racing Team using a Richard Lloyd honeycomb tub.

It competed successfully between 1988 and 1993 and is now up for sale in extremely original (unrestored) condition.

What can I say – 911’s especially in their “early” form are just the bees-knees and there were plenty on show at the event.

ST’s and ST Replicas are currently in vogue right now and I hope sincerely that they don’t suffer the same fate as the much replicated 2.7RS by having their uniqueness diluted.

My mate Kirk is in the middle of creating a rather wonderful ST replica using a former ’72 South African race 911. I hope to feature the development of this car in a future post.

I will own a 356 at some point in my life but which one! The last of the line 356C is the most practical proposition with its well sorted mechanical set-up and all round disc brakes but I still have a hankering towards the A’s and pre-A’s.

I had a good close look at a couple of Pre-A bent-screen cars a few months back at Jaz Porsche – one was beautiful and highly original ’54 car (right down to untouched interior) and the other was another ’54 Coupe purchased by Steve Winter to restore and race. It’ll be interesting to see the former at the upcoming 43rd Porsche 356 International event and it’ll be good to monitor restoration progress on the latter.

It’s good to know that a reincarnated TVR is finally manufacturing cars again but there was one particular car on show from TVR’s history which caught my eye.

Only four TVR Tridents were built in 1965 using a TVR Griffith chassis and Ford 4.7Litre engine wrapped in steel and aluminium bodywork designed by Trevor Fiore at Carrozzeria Fissore.

Financial troubles prevented TVR from fully securing ownership rights of this  handsome and powerful car and during the confusion of bankruptcy and then establishment of new ownership under Martin and Arthur Lilley – Bill Last (a Suffolk TVR dealer) secured manufacturing rights under the Trident name.

Trident cars were quite different – utilising a Big Healey chassis and fibreglass bodywork.

Ironically – TVR returned to the wedge shaped styling between 1980 and 1991 with their Tasmin 200, 280, 350, 400, 420 and 450 models. If only the creation of the TVR Trident had not coincided with one of TVR’s many financial downturns and subsequent change of ownership!

An excellent day of auto-nerdy fun!