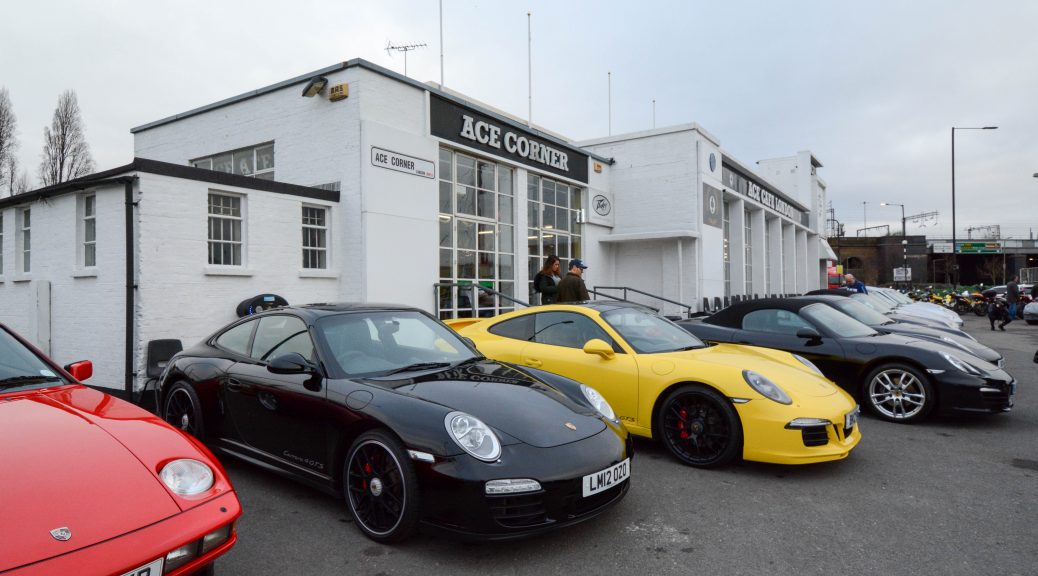 Various things seemed to be conspiring against me visiting the New Year’s Eve Porsche meeting at the Ace Cafe but barriers were circumvented and hoops were gone through to enable me to attend.

This is normally an evening do but as it was New Year’s Eve the time was changed 11:00.  I arrived at 11:10 – and was mortified to find the car park was already chocker-block and I had to wait until someone drove out before I could park-up the Yellow Peril.

Withe the Yellow Peril securely ensconced in the Porsche packed car park – I went to explore and chat with fellow Porschefiles, which including a few previous acquaintances and some new ones. All in all – this was an exceedingly  pleasant way to spend dwindling 2018 time on a cool, grey New Year’s Eve! 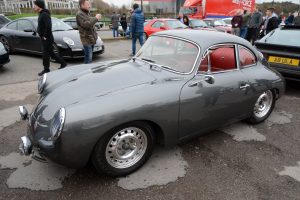 PCGB London Region organiser Nick Pike was standing rather proudly next to his latest acquisition – a US-sourced 356SC in a rather fetching shade of dark grey with red leather interior. 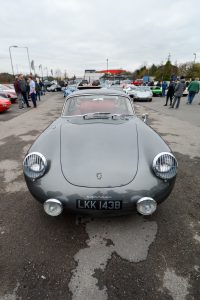 In true Outlaw style – the car came without bumpers and was fitted with very nice looking Speedster seats. One interesting feature was the wheels which Nick pointed-out were chromed 944 wheels which looked rather good and not not so radically dissimilar to period 356 wheels – albeit without the correct chrome hubcaps. 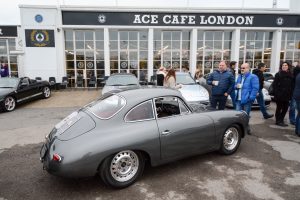 Fresh from a comprehensive check-over and sorting-out by Andy Prill this was one of the first forays Nick and his other half – Ed had managed in the 356.

The sensible choice from a practicality and usability perspective would be a 356C or SC as these last-of-the-356-line cars enjoyed improved engine power, bulletproof transmissions, disk brakes and are regarded as the most drivable model. Having said that however – the earlier cars, most especially the 356A and Pre-A cars are sublimely beautiful.

It remains my contention that original designs maintain the purity of their designer’s original concept. That is quite definitely the case with early Porsche 356’s and 911’s and it’s really interesting to see how personal and classic car market tastes change over time with older models emerging from periods of relative unpopularity to become the most valuable design icons of the marque.

The particular longevity of Porsche’s 356 and 911 models has facilitated repeated cycles of updating, backdating, replicas and “outlaw” modification which can all get a bit confusing. At the end of the day however – it all boils down to personal taste and maintaining the essence of the car! 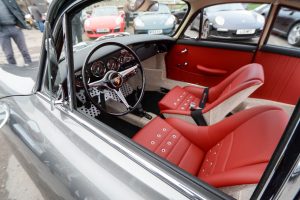 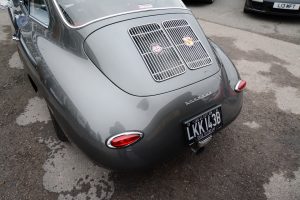 I thought the mild, dry weather might have tempted-out a few more early 911’s but they were rather thin on the ground although to be fair – the packed car park might have forced some to to be “abandoned” in the surrounding streets! Note to Ace Cafe – “You provide a wonderful venue but please expand your car park”!!!

There was a rather tidy silver grey LHD 911E which looked very nice. With a ’69 registration I assume this was an early LWB car with a 2.0L engine. This model was superseded by the 2.2L models for ’70 and ’71 before the 2.4L car was introduced in ’72. 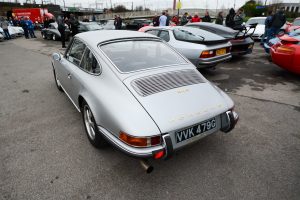 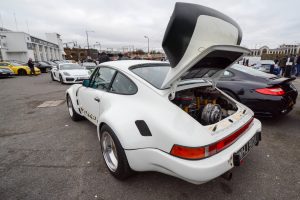 There was also an incredibly beefy looking 3.0L Carrera RS which sounded as good as it looked.

The massive flared wheel arches, deep front spoiler, air scoops and enormous whale-tail on this beast certainly gave it a purposeful stance. Seeing this thing looming large in you rear view mirror on the North Circular could be a rather nerve-jangling experience! 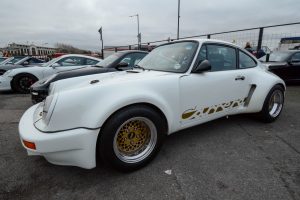 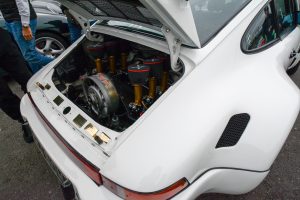 Last but not least was the Yellow Peril which had latterly been suffering from a non-starting starter motor. Rumaging around under the car over the Christmas break finally enabled me to  diagnose the problem as being caused by a dodgy earth connection on one end of the transmission earth strap.

I  still need to address the stripped thread on one of the captive bolts to which the earth strap attaches but cleaning-up terminals and inserting additional packing washers restored mobility for the time being.

Steve at Jaz Porsche has confirmed that it’ll be a relatively simple job to grind-off the captive bolt and replace it with a new one. This will enable the earth strap to be fully tightened and should reduce the risk of intermittent starting problems that the car suffered from this year.

This same dodgy earth caused the Peril to fail to start a couple of weeks back on a garage forecourt – forcing me to push it away from the fuel pump only to pull a leg muscle in the process and block access to the air and water dispenser with the car. Thankfully – people requiring air and/or water were incentivised to give me a push start to get rid of the blockage! Thanks very much chaps – but I’m still hobbling due to my Early 911 induced leg injury!!! 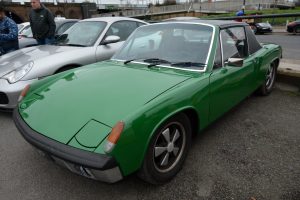 You can pretty well guarantee that at least a couple of 914’s turn up to such events such is the enthusiastic following for these cars which resulted from a VW/Porsche collaboration.

The 914 was meant to provide VW with a sports model for their car range and simultaneously provide Porsche with a replacement for their 4-cylinder 912. Although originally designed with flat-four power Porsche spiced things up a bit by shoe-horning a 2.0L 911 Flat-6 engine into the car to create the relatively short-lived 914-6.

Interesting to note that a later collaboration with VW/Audi and Porsche in the form of the 924 also failed (in terms of there being a specific VW/Audi badged version) but it allowed the 924 to be marketed purely as a Porsche model and resulted in onward development by Porsche to create  the much more sporty 944 and 968 models to complement Porsche’s front-engined flagship and potential 911 replacement – the 928.

I followed Kevin around Donington race track on a Historic Festival demo run a few years back – me in the Yellow Peril and Kevin in another of his 914’s. 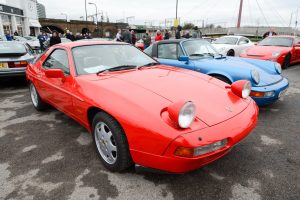 The 928 seems to have fully established itself as a desirable classic and I have to say – it must be a very comfortable, powerful and practical proposition for those with a particular predilection for having their Porsche engines up-front and water-cooled. 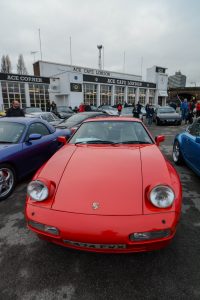 I’ve always liked the 928 but they seem to be awfully wide when compared to my narrow bodied 911. Not sure if it would fit in my garage or easily get through some of the tight central London road constrictions!

I really must try one out on the road sometime!

……..and there were some newer Porsches! 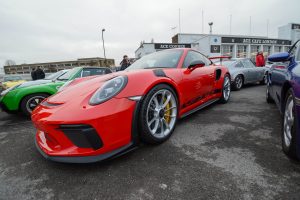 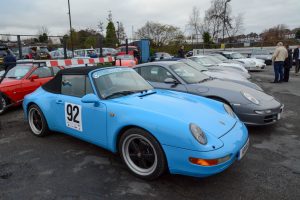 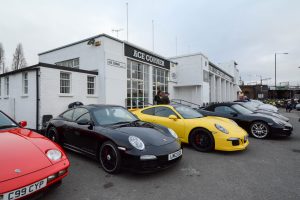