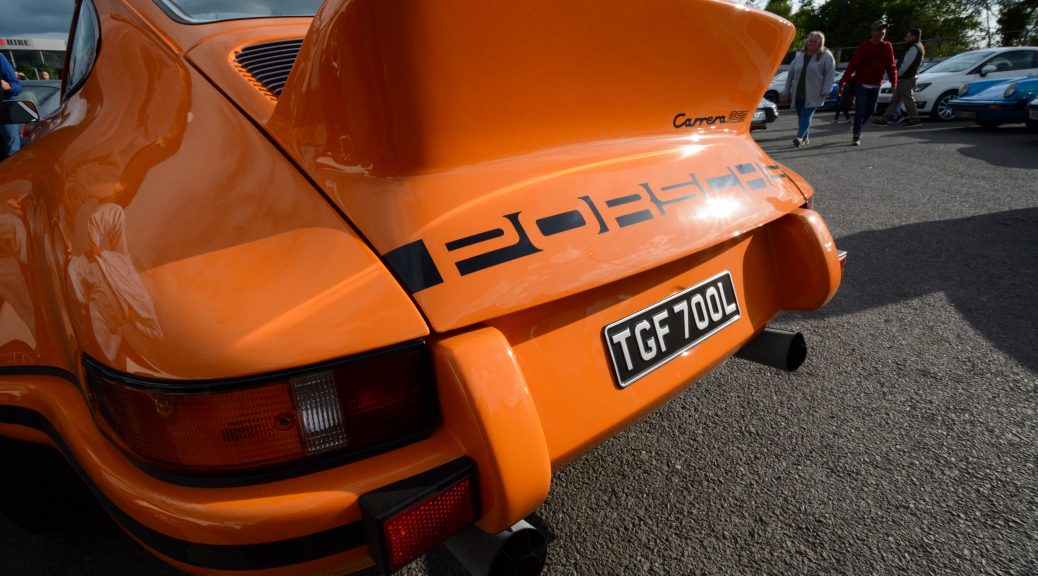 It’s the last Monday in the month and it’s a Bank Holiday. A perfect recipe for an especially interesting turn-out for Porsche Night at the Ace Cafe. Time to fire-up the Yellow Peril and navigate the delights of the North Circular en-route to this world famous automotive venue.

Arriving over an hour earlier than 6PM official start-time guaranteed me a good parking place but it didn’t mean I was the first one there. Porsche Club London Region organisers Nick and Ed Pike were already hard at work securing the car park for Porsche parking despite the fact they had driven straight there from a weekend tour they’d organised in the Netherlands.

Once the Yellow Peril was parked-up, I had a good if somewhat staccato chat with Ed as she regularly broke-off to welcome Porsches new and old into the car park. Ed was recently elected into as Marketing & Strategy Director and Chair of Porsche Club GB, a job to which I’m certain she will bring her unbounded enthusiasm and drive to the benefit of all.

The latest quite radical changes in club management indicate that it is changing and evolving in a positive way which is good as historically it has gone through periods of malaise during which I quite frankly lost interest and allowed my membership to lapse.

Thankfully Porsche (the company) and the Porsche Club have now grown to recognise the brand value of older cars which are the very foundation of company and club. They are thankfully organising more events celebrating older models such as the upcoming KG at Goodwood event in August for cars built between 1948 and 1973. This will replace the sorely missed Classics at the Castle event at Hedingham.

I’ve seen this car lots of times at the Porsche Club Out East monthly meeting but I finally got around to chatting with the owners to find out more about this striking car.

They confirmed that it is a backdated 3.2 Carrera retaining the mechanical core of the original car but with various modifications make it significantly lighter and more visually akin the super rare ST and R models of yore.

Bodywork modifications include a fibreglass “long” bonnet, fibreglass engine lid and front and rear bumpers (with R-style tail lights). Further lightening of the car was achieved through removing the rear seats, replacing rear screen and rear quarter windows with perspex and by drilling holes the door handles (a la Magnus Walker).

Added to all of this are more subtle changes to fit the correct period chrome engine grille and badging, plus a period number plate and lovely twin pipe silencer. The interior also benefits from very stylish hounds-tooth (Pepita) cloth inserts in the snug bucket seats. The end result is a beautiful looking car with bullet-proof mechanical underpinnings that can be used for continental touring or a jolly good thrash around “the Ring”.

I was interested to see this car turn up as it was a ’71 model year car, the same as the Yellow Peril. A chat with the owner was essential to find out more…….

The car had been fully restored after being imported as a matching numbers car from the USA. Thanks to a previous engine rebuild, the engine capacity had already been increased from 2.2 to 2.4 Litres so this would certainly have given the short stroke engine that bit more torque and get-up-and-go that can be lacking in the carburettor-fed T-engine.

The owner explained that the car is up for sale as his inclinations lie more towards hot-rodding – not something you would really want to do to an original early 2.2L 911 given their rarity and increasing value. Luckily – he already had the a car to satiate his modification inclinations in the form a of a very rough and rusty SC parked next to the T and shod with “Cookie-Cutter” wheels. Looking forward to seeing the end result at the Ace in months to come.

This lovely blue 911T sounded very nice as it drove into the car park.

Why oh why didn’t I manage to speak to the owner to get the low-down on his car. From the registration, I assume it was/is a ’70 2.2L car running on carbs but it sounded a bit fruitier than a bog-standard T. Oh well – I’ll hopefully catch him next time.

I’d like to be more specific about the precise model here but unfortunately I didn’t get to speak to the owner of this particularly striking orange beast.

Orange or is it Tangerine is a colour that really suits early 911s, particularly those with steroid injected wheel arches housing unfeasibly wide wheels and tyres and sporting a duck-tail rear spoiler.

On the face of it – the car looked and sounded like a rather nice if somewhat raucous 2.7 RS but confusingly, the badge on the engine grille said 2.4 and the engine badge at the base of the rear screen indicated 4,0 suggesting that the car had a 4 Litre flat six under the engine lid. The cars “L” registration suggested it’s a ’73 car ………. I’m confused!

What the hell, it looked and sounded great!

There’s Something About a Whale Tail!

Whale Tails were introduced by Porsche on their flagship 911 Turbo cars in the mid-’70s. At that time, they transformed what to many was already a rather weird rear-engined German concoction into something from another planet.

Weird looks and rear-engined configuration were however conveniently forgiven due to the brutish power that the 930 Turbo could suddenly and scarily inflict upon unwary drivers after several seconds of Turbo-lag ticked by.

One normally associates rear wings with reducing lift by creating down-force but in a 911 with a weighty engine and transmission hanging out of the back, the whale tail was also required to vent more air through the engine compartment. This had the dual benefit of cooling the air and oil cooled engine AND delivering down-force.

In later 3.3L variants of the 911 Turbo the whale tail developed up-turned edges to force more air through the inter-cooler and in this form it was referred to as the tea-tray and was probably used as such on many a Porsche picnic.

The whale tail lived on however by being attached to sporty SC and 3.2 Carrera models. Sadly, many of these were removed to give these cars a more retro look in subsequent years. A trend which i sincerely hope will be reversed as nostalgia embraces the original ’80s Porsche designs.

This rather nice and rather rare manual 928 S4 was parked near the car park entrance. I do like these cars but I would really need to have a lengthy test drive to work out if I could live with its much wider body in comparison to my narrow bodied Early 911.

I would imagine these cars make great autobahn-stormers but they might be a tad bulky for easily squeezing through inner city road constrictions.

Sadly my visit to the Ace Cafe was all too short I did manage to ogle a few more eye-catching cars during my visit. Weirdly – it included a Mercedes saloon which almost wasn’t allowed into the car park until the owner patiently explained it was one of the very rare Porsche built 500 E models.

These cars feature a wonderful 5 Litre M119 V8 32 valve DOHC engine which churned out 322 bhp and 354 lb ft of torque which equates to a top speed of a 160.6 mph – not bad for big bad fat-cat 4-door saloon! I need to check my facts on this but this car might have been one of the super-duper-rare last 120 cars built to very exacting specifications for “special” customers.

One of these would do me for the weekly family supermarket run or on a super-naughty but probably speed-camera-prohibited sub-5 hour trip from London to the Independent Republic of Cumbria. You might think that I actually achieved that once but I can’t possibly comment!