After a serious dearth of car related outings of late – I was quite looking forward to the Regent Street Motor Show.

Having closely scrutinised a couple of cars that caught my fancy – I left the event early however as it was simply too crowded for my liking.

To be fair – there are limited options for varying the format and content of the show as the main stars are the London to Brighton Veteran Cars many individual examples of which turn up every year without fail. Genevieve is a prime example.

As regards the crowds – holding the event on one of Europe’s most prestigious shipping streets is a blessing to the tourists but a curse to anorak petrol heads trying to get photos of cars without selfie obsessed punters in front of them!

I think the non-Veteran elements of the show might benefit from more meaningful expansion. The Jag display was large enough to carry it off but the tiny display of Beetles seemed a bit limp and then there were other small groups of cars and seemingly incongruous singletons.

There are loads of car clubs out there who will happy organise their members to put on fabulous marque specific displays!

A goodly number of Jags were gathered at the Picadilly Circus end of Regent Street including a variety of XJs and Mk V saloons and drop-heads but all eyes (including mine) were drawn to the magnificent XK’s.

I really love the XK120. In its simplest OTS form – it is to my mind one of the most beautiful cars ever made.

It was conceived seventy years ago by William Lyons and his brilliant team during WWII and its launch in 1948 led to it becoming the must-have car for up and coming Hollywood stars as well as European circuit and road rally racers. 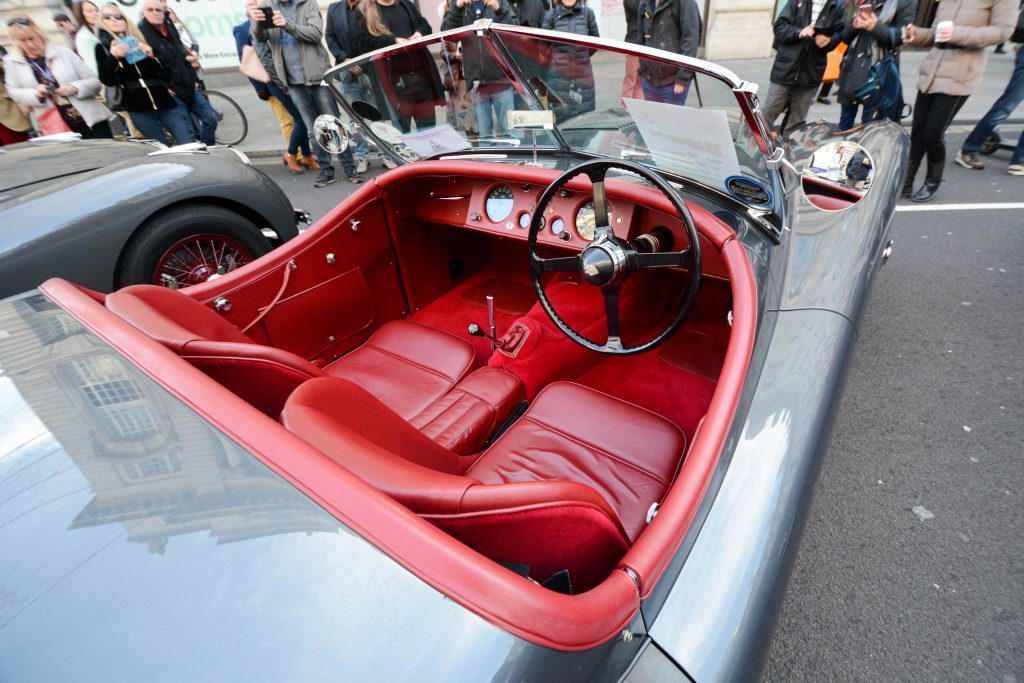 The XK120 was not just about looks. Beneath that long tapered bonnet lurked the delectable and powerful twin-cam XK engine which power the car along the Jabbeke Highway in Belgium up to a speed of 120 mph – giving the XK its name.

A couple of XK140’s were also on show but their more bulky full bumpers are far less elegant that the thin quarter bumpers of the 120.

The XK150 Coupe demonstrated the final fattening-up of the XK design as it looks more like a slightly scaled-down MkII than an XK sports car!

The MkV saloons and drop head looked smart an suitably vintage with they running boards and separate headlights.

I live in hope that early Porsche’s will be a feature car in years to come but I could at least satisfy myself with a small celebration of an important Ferdinand Porsche design.

Manufacture of the Beetle will finally come to an end after a phenomenal run of eighty years. To mark this milestone – a small gaggle of cars were on display including a Herbie replica.

As ever – there was a good proportion of the London to Brighton field on display along with their period costume bedecked owners to be “judged” by the great and good of the Veteran Car community plus Alan Titchmarsh (for some unbeknown reason)!

Edd (Land of Giants) China was in attendance towering over and other motoring legends and luminaries could be seen wandering amongst the automotive art works. I bumped into the great Jochen Mass at one point!

There were a few examples of American Heavy Metal which cannot fail to impress in terms of sheer size and presumably weight but I can’t help thinking that one could manufacture a small fleet of European sized cars from the metal used to create just one Yank Tank!

Back To The Future

In some ways this is a good working title for the Regent Street Motor Show as the early cars show-off a range of innovations – some of which benefitted later cars and some of which didn’t!

I almost included the DeLorean in the American Excess section due to it’s US creator and its somewhat unorthodox design but the cars were of course made in Dunmurry in Northern Ireland.

Not sure if this particular car was originally used in the film or whether it was a recreation. It seemed to generate a bit of interest regardless.

The De Tomaso GTS certainly stood out with its bright red paintwork and monstrous rear wing. This US/Italian hybrid never really qualified for the super echelons of the supercar league as build quality, performance and reliability never matched that of the competition.

Had it been adopted by a larger manufacturer as has been the way with many other marques including Ferrari, Lamborghini and Bugatti to name but a few then it might have been a different story.

I’ve always liked the Mercedes 280SE which is odd as I don’t normally like large cars but there is a refined beauty to this large coupe which seems to make look less bulky. It is underpinned by solid and reliable mechanical components from the classic Mercedes era.