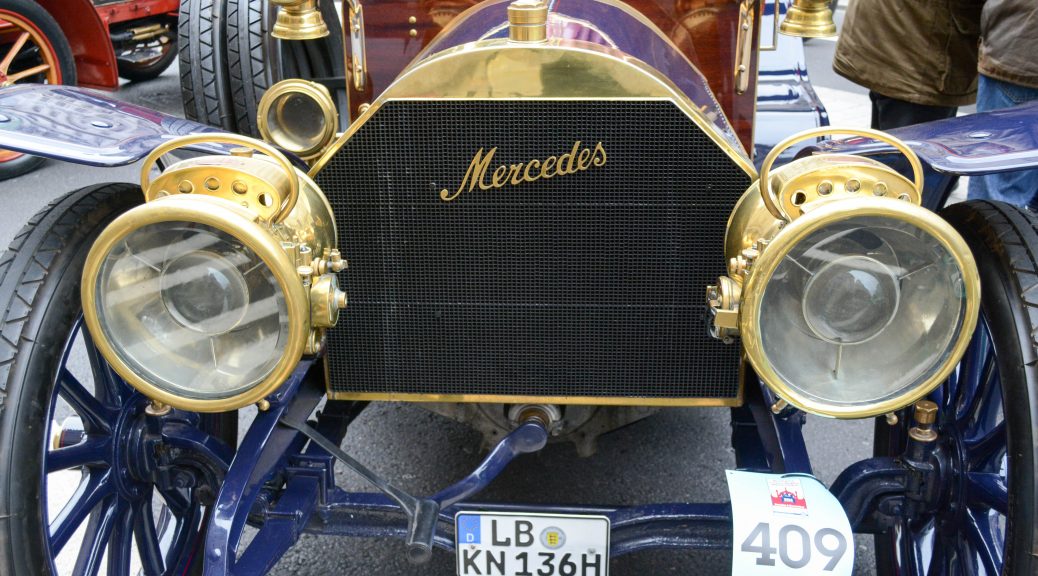 This event has become an annual institution as the Saturday prelude to Sunday’s London to Brighton run.

Locals and visitors to London are privileged to be able to wander amongst the carefully preserved but enthusiastically used progenitors of modern cars.

I got chatting to a coupe of guys from Antwerp who were knocked out by their luck in coming to London for the first (but not last) time and just happening upon the Regent Street Motor Show. Loads of other visitors must have shared the same fortuitous experience.

Interspersed amongst the veteran cars were some more modern motors including Jags, a Ferrari 246 Dino race car, Hunt the Shunt’s McLaren, some Piper GT’s  and a trio of wonderful race prepared Austin A35’s.

You just can’t tire of seeing these lovely old cars and the fact that this year marked the 120th running of the London to Brighton Run made the event even more special.

My car of the day was an Oldsmobile that took the word “patina” to new extremes with it’s metalwork reduced to nothing more than frilly rust and fresh air. Its woodwork had faired no better with woodworm having taken it’s toll on panelling and even wheel spindles converting them to sawdust. It would be sacrilege to restore it!

Veteran cars just keep on going thanks to the care and enthusiasm of a succession of lucky custodians. A number of the cars on display had been in the same family ownership for several generations making them the best possible family heirlooms.

Close examination of the veteran cars reveals a wealth of details – some quaint and some bafflingly complex.

The serious side of the public display of the veteran cars is a concords competition judged by the great and good of the automotive world.

I really don’t envy their task as each and every car deserves merit but my vote goes to the rusty Oldsmobile!