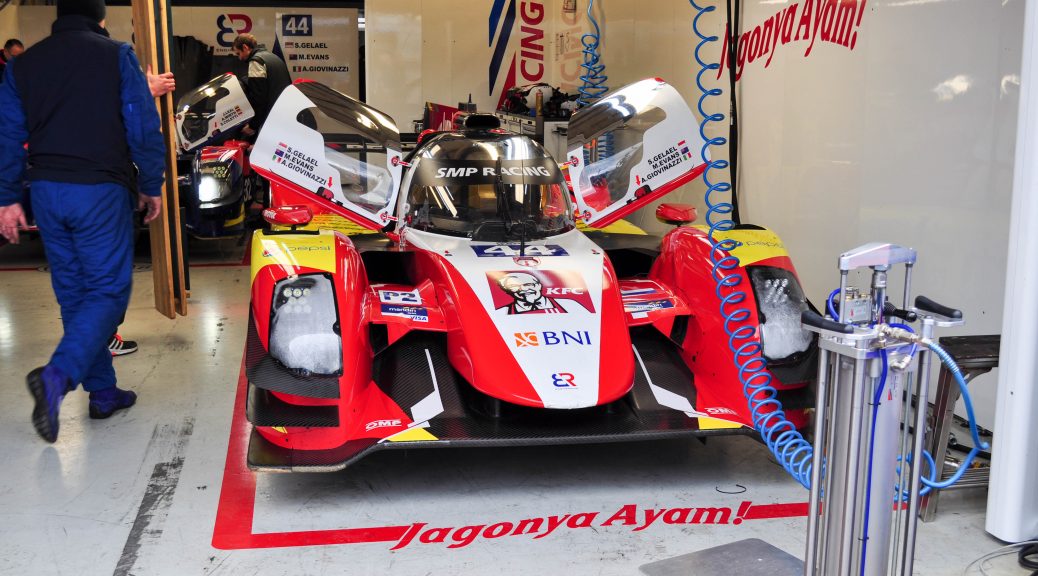 Arriving at Silverstone in a blizzard on Saturday morning didn’t bode well. After depositing my old 911 in the Porsche Club GB parking zone – a warming coffee in the club tent was essential before wandering into the circuit to find out if and when the racing would start.

As the sleet and snow subsided – the race marshals gradually abandoned the warmth of the Paddock Café to make their way trackside. A sure sign that racing was about to commence.

Endurance – The Clue’s In The Name

Full-on racing in all weather conditions for 4-24 hours with refuelling, tyre changes, driver changes and multiple classes of cars of varying levels of performance on track at the same time. The skill, stamina and bravery of the Endurance drivers is incredible as they concentrate not only on having to on navigate the bendy bits but also on avoiding much slower or indeed much quicker cars.

Endurance race fans are also a necessarily hardy breed in having to survive long races during which they can be subjected to the diametrically opposite extremes of hypothermia and sunstroke over the course of single weekend. Then there’s the noise – somewhat tiring after several hours but an essential aural accompaniment to such frenetic racing activity.

The 2016 running of the European Le Mans Series Four Hour Race and the WEC Six Hours of Silverstone tested drivers and fans to their limits with its unique mix of snow, sleet and icy rain on Saturday and then blazing sunshine on Sunday but the racing still provided a fantastic spectacle.

Porsche Club GB pulled off a wonderful arrangement on Saturday with the Silverstone Porsche Experience Centre which allowed club members to be shuttle-bus’d across to enjoy the hospitality and warmth of the centre next to the Silverstone track between Becketts and Stowe.

Porsche had some wonderful historic cars on display but they offered the much more contemporary opportunity to  enjoy a Panamera experience with one of their professional driving instructors.

The rapid trip around the varied sections of test track adjoining the Experience Centre was fantastic with the pro-driver putting the Panamera through its paces whilst explaining the benefits of its sophisticated control and safety systems.

The skid pan, high speed track, low friction donut area and launch control demo drag strip were great fun. Whilst I am not a fan of the Panamera’s looks – I now have an enormous amount of respect for its performance and overall capability.

The visit was wonderfully finished off by a Q&A session with two of the factory 919 Hybrid drivers – Timo Bernhard (Car Number 1) and Romain Dumas (Car Number 2).

Other than FIA WEC qualifying and the Porsche Cup Race – the main event for Saturday was the European Le Mans Series  Qualification and subsequent Four Hour Race.

Morning ELMS qualifying in the icy sleet and rain must have been a truly miserable experience for the drivers – especially for those competing in open cockpit cars but thankfully the rain gradually cleared and the race track dried for the race proper.

The results of of the cold and wet qualifying session were not terribly representative of the final results which is hardly surprising given the dreadful conditions.

Between soggy qually and the race proper – there was a chance for closer inspection of cars and drivers in a Pit Walk in the National Pits. It was really interesting to see the high level of professionalism and meticulous attention to detail across the ELMS classes of LMP2, LMP3 and GTE cars.

This series is restricted to a series of European races and of course a chance to race at Le Mans – the jewel in the Endurance crown. It offers a fantastic stepping stone for manufacturers and drivers to the worldwide WEC series.

One familiar face I spotted amongst the drivers was the ex Manchester United and France goalkeeper turned endurance car driver/team manager – Fabien Barthez.

With a thankfully drying track and gradually improving (but still bitter cold) weather the ELMS race got under way and I have to say it was great fun to watch and no less exciting than it’s bigger brother the WEC series.

The fact that it was the opening race in the season and he weather resulted in quite a few incidents and the podium finishers across all three classes thoroughly earned their honours at the end of the very cold four hour race.

Hats off the outright winner – the G-Drive Racing Gibson 015S – Nissan. The drivers of this open car must have had an infusion of anti-freeze into their blood streams prior to the race in order to not only service but to win the race!

Results were as follows:-

A great if bloody freezing day out with the added bonus of the Porsche Experience Centre.